Hawkeye Racing is an early GPVWC Constructor who returned to the competition under the leadership of Ric Scott but whose Superleague outfit are now run by Dutchman Wopke Hoekstra. The team currently compete in the Superleague. Hawkeye Racing's first involvement in the GPVWC came way back in the championships first year, 2000, but they pulled out mid-season in 2001 to concentrate on the now defunct HOWC. 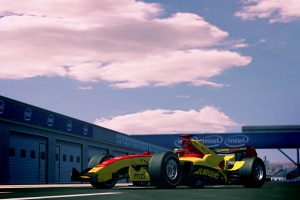 Back in 1999, a 12-year-old Ric Scott started painting cars for the game GP2. It was around this time that he founded his own team 'B.R.T.' (British Racing Team), the cars livery was based on the '94 Williams design. The sponsor on the side, 'Titteringdales', was his parents' guest house in Grasmere, the Lake District.

A year later, Ric started talking with other F1 fans on the Alpha F1 forum and discussed starting up a league for GP3 racers. He decided to call the league the 'Hawkeye Offline World Championship' and changed his teams name to Hawkeye at the same time. As well as racing in HOWC, Hawkeye Racing also entered the GPVWC with with Blair Disley and Alexander Masendycz driving for them. Unfortunately, due to the time involved in managing a team in the GPVWC, Hawkeye pulled out of the championship half-way through the 2001 season. Meanwhile, Hawkeye continued to race in the HOWC, scoring a number of podiums in their first few seasons.

The team took a couple of years out but returned to racing with the release of ISI's rFactor in 2005. For their first season back in the HOWC, the team signed Stefan Gordon & Michel Haringsma with team manager Ric Scott racing along-side them. The season would turn out to be their most sucessful yet, clinching the constructors titles with 6 pole positions and 5 wins. In 2006, Hawkeye went on to retain the constructors title along with their driver, Stefan Gordon, winning the drivers championship. The team carried on fighting for victories in the HOWC until 2007 when the league stopped running.

On the 31st July 2011, Hawkeye Racing officially announced their involvement in the GPVWC Supercup series. In their announcement they confirmed the signing of two drivers, Finn Tommi Koivunen and the Latvian Viesturs Priede. Both made their Hawkeye Racing debut's at the Canadian Grand Prix. Priede was ever present for the remainder of the season, but, despite several strong performances he was unable to get his first points for Hawkeye, just missing out on two occasions, finishing in 11th. Koivunen could only manage 3 races for the team and, although he showed pace, was unable to finish any of the races. Hawkeye manager Ric Scott drafted in two drivers as replacements for Koivunen, Scot Sam Millar and British driver Adam Rouse. Rouse came 8th and 4th in his two races, making him responsible for all of Hawkeye's 11 points. His 4th place in the final round meant that Hawkeye moved above Racing Team Schroten in the constructors championship. With the team having joined towards the end of the season, 2011 was always going to be more about learning than competing, getting them prepared for their first full season in 2012. 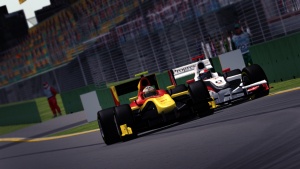 Nicholls gets past Jason Muscat in the Supercup 2012 season opener

Impressed by Adam Rouse's performances last season, Hawkeye quickly snapped the driver up for 2012. The 2nd seat was taken up by the talented rookie Jack Nicholls. The season got off to a great start in Australia with Nicholls and Rouse finishing 3rd and 4th respectively. Unfortunately, this was to be Hawkeye's best team result of the season, mainly due to the poor luck of Jack Nicholls who only managed to score points in 3 other races, despite showing great pace throughout the season. Rouse had a sublime season, only just missing out on 3rd in the drivers' championship by 3 points. Hawkeye finished 5th of the 15 teams with 109 points. 2012 was Hawkeye's last year in the Supercup due to new GPVWC rules allowing a team to enter only one of the 3 single seater categories (SL, SC or FC).

During the 2011 season, team manager Ric Scott had stated his intent for Hawkeye Racing to compete in the GPVWC Superleague and confirmed this in a press release on October 29, 2011 with Triple Double Racing effectively becoming Hawkeye for the 2012 season. 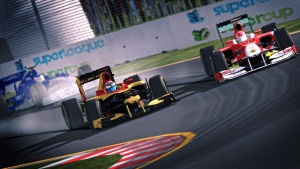 The team endured a rough start to the season with de Vos suffering several retirements due to technical issues. Redshaw's consistency throughout the season gave the team some well needed stability, scoring in the points on 10 occasions. The Brit left his best for last, with an 8th in Japan and 6th Singapore to finish the season.

From round 10 onwards, the talented Australian, Jamez Shepherd, joined the team. The driver came with a large price tag after already scoring a 3rd and 4th for Red 5, but he quickly proved his worth, coming 2nd in his first race for Hawkeye. Shepherd reached the podium a further 5 times to ensure Hawkeye finished 3rd in the constructors' championship, an impressive feat in the teams first full season. At the end of the Singapore GP, Jamez Shepherd announced that he wouldn't be driving for Hawkeye next year. The Australian's exploits have left Hawkeye in a very healthy position for 2013, anyone that takes his place will no doubt have a competitive car next season.