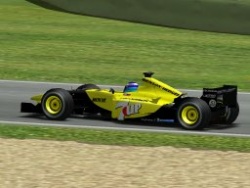 The qualifying, race and in-season testing sessions were all driven off-line and the saved game files were then submitted to the GPVWC for validation and classification in accordance with set deadlines. Saving the game at any point (for the session to be continued) was unrestricted.

The top eight finishers scored points in the race.

FinOz and Woods Racing were new entries for the 2004 season.

Stealth F1 decided to withdraw shortly before the season began, meaning the team was sold and became Puma F1.

Points are awarded to the top 8 classified finishers.

* Fastest laps are currently unknown for Hungary and Australia.
† Drivers did not finish the Grand Prix, but were classified as they completed over 75% of the race distance.