Lukas Euler retained his Superleague World Drivers Title in a closely fought season long battle with eventual runner-up Ruud Heesterbeek, in a season that saw sixty two individual drivers take part in at least one race across eighteen rounds. There were four different race winners including first ever Superleague victories for Jim Parisis and Ruud Heesterbeek as well as their respective teams. 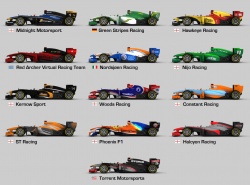 The following teams have confirmed their 2013 participation.

The number of team entries remained at 13 for the 2013 Superleague season with 3 spots available for new teams, two new entries were promoted from the Supercup.

The 2013 testing schedule is as follows:

The Chinese, Dutch and Singapore rounds were all dropped in their place.

† Drivers did not finish the Grand Prix, but were classified as they completed over 75% of the race distance.
‡

† Cars did not finish the Grand Prix, but were classified as they completed over 75% of the race distance.
‡