Van Buren's former team, Vod:Bul Racing, who were the reigning team's champions, had merged with the multi-league-spanning Avid Chronic Racing organisation. Following that organisation's tie-in with the real-life Zakspeed racing team, Vod:Bul entered 2018 under the name ACR Zakspeed though Mike Pitman remained in control of the team's running in the league.

ACR Zakspeed were not the only team to have a major name partnership; Streetfighter Racing Systems would run in the branding of Red Bull while newcomers Epic Racing ran in partnership with Radical Sportscars.

In a similar vein, Wauters Automotive, one of the bright stars of the 2017 season, went through its own re-branding, henceforth being known as Edge Esports. It would be Edge and ACR who would come to dominate the championship. After a battle that ran to the penultimate round of the championship, German ACR driver, and reigning Supercup champion, Alex Siebel, took the drivers' championship from Edge's Croatian driver Peter Brljak, himself a former Formula Challenge champion. ACR would win the teams' championship, with Edge coming home second.

Siebel emulated his compatriot Philipp Puschke who won the Superleague driver's title in 2015, on the back of winning the Supercup title the year before. As of the beginning of 2019, not only are both the only two drivers to have won back-to-back championships over different series, but also remain the only Superleague champions to have previously won a championship in any of the feeder series.

Evolution and Epic humbled many of Superleague's more established teams. Ricardo Costa's third place for Hawkeye Racing at the Canadian Grand Prix was the only time a team outside the top four would appear on the podium all season long.

Particularly, among the established teams who endured a season largely lacking of former glories, Nordsjøen Racing failed to score a podium for only the third time since the team's original season as Emerald Irish Romanian Equipe back in 2002. It sadly proved to be the last time, as the team; the most successful and longest-running in Superleague history; withdrew from competition after the end of the season. 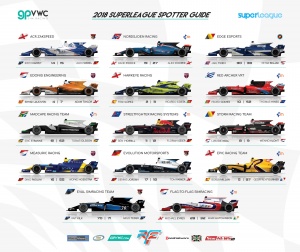 The 2018 testing schedule is as follows: